The last time I posted here, I was 42 days away from attending the O’Reilly  Open Source Conference.

It turns out, that as I found myself moved to post here again, that I began writing this last Monday, which was 42 days since the start of OSCON.

Life has such an interesting symmetry to it.

It was also the day that I submitted my resignation to NC State University, where I’ve been, with two short interruptions, for 27 years as a student and a staff member.

As far as a review of OSCON itself, it deserves a longer review than I’m prepared to give it — and I’m not sure that quite does it justice, pro or con.

All of the break out sessions that I attended were pretty good. The tutorials were incredibly well put together, if blindingly fast. Mostly I got exposed to things that I need to go back later and dig into.

And I learned that whether or not containers are the future for all production services, they are absolutely the present and future of setting up environments for training sessions and labs and demonstrations.

The keynotes didn’t inspire me. Some of the people giving them certainly did.  Particularly Nikky Mill, Jerome Hardaway, and Suz Hinton

The vendor keynotes were the same old drivel they’ve always been.

But something kind of remarkable happened outside of the keynotes, sessions and events.

The grant that funds my work at NC State is now beginning its eighth and final year.  While it may (likely) return in the Agriculture Bill for a new round, and a competitive application, as I mentioned in the last post the non-profit organization that that oversees our application has changed focus.  Less in-depth technology work in support of Extension programs nationwide, and more process improvement and professional development in design thinking.

So I’ve been working on ramping down the technological projects I built or helped build over the years, and keeping a very selective eye out for what might be next.

There’s a huge number of factors that find their way into my job decisions now.  The same things that have always been there: the technology is important; the culture is important, the meaning of the work is incredibly important; the feeling that my work is valued and that I can make a contribution and help others learn and grow and in the process learn and grow myself is non-negotiable.

But there are other intangibles: I’ve been full remote for over 10 years.  I work really well, if a little too long, remotely. How important is remote to me? Could my ~5Mbps DSL only-low-latency-service-I-get internet service even support remote work? It does now because I designed my infrastructure to allow it to be easily managed over reliable, low-latency, but low bit-rate connections, but what about one I didn’t design?

And retirement. My retirement is a pension plan that now returns a significant amount per year at retirement for every year I stay in the plan. I can’t transfer it outside of state institutions. I can’t get the state’s contributions and roll those over elsewhere. I certainly can freeze what I have now and start new, but to come close to the yearly increase in value, any new plan has to involve a significant contribution amount. Any 401K match or even an unheard of full-employer contribution isn’t going to do it.

And there’s a very large pool, employer-paid premium health care. I thankfully am healthy enough that I don’t need it right now. But when I have needed it, just for minor things, it alleviates a significant amount of stress and worry. (Do not get me started on the abysmal state of healthcare portability and expense).

Any opportunity needs to be the right one. The right culture, technologies that I believe in and enjoy (there’s a lot of those). The work really has to mean something. I want my work to help others and to have value and to continue to learn. The work needs to be flexible, if not remote. And then there’s that retirement and healthcare thing.

I’m really incredibly thankful to be in the field I’m in. There’s a shortage of employees and there’s a lot of work available. Most of it is still not the right opportunity, but that leaves a lot that is. 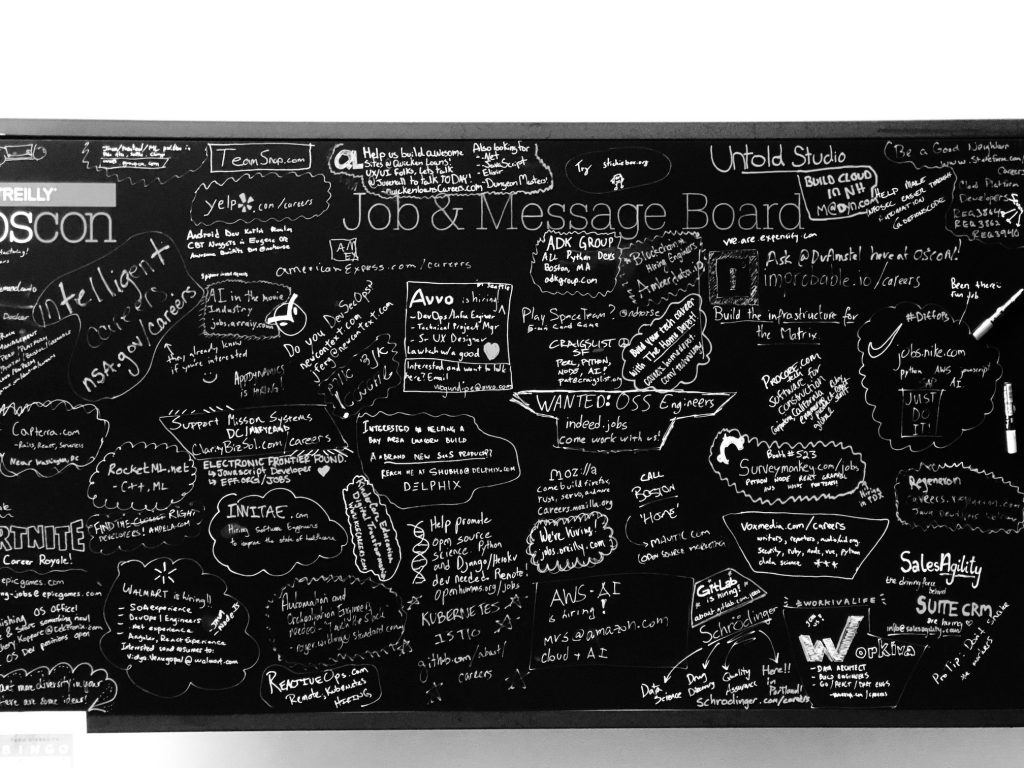 But as that job board at OSCON filled up over the days I realized something, that I’ve known for a long time, I’ve even stated it to myself and others, but it came back stronger than it ever had.

I want to do leading-edge technology work in a top-tier Public University environment.

I still want the same exact thing I wrote last time I tried to make a job change. That is, to Do, Learn — but within higher education computing.

Higher education computing is so fascinating, and it varies tremendously by division and department, academic vs. administrative vs. research.  It varies dramatically in scale and scope.  No other environment that I’ve ever had external exposure to comes anywhere near the generalization and the opportunity (if not the requirement) for individuals and small teams to do so many different things (and still need to master a few). I think it’s fashionable these days to call this “T-shaped skills” — only it’s not only collaborative breadth, it’s functional breadth.

I would have never had the opportunity to do as many things as I’ve done, from computing support to development to networking to hardware to servers to being a business analyst applying my work to multiple knowledge domains, anywhere else.

And in its promise, if not always the practice, I believe fundamentally in the teaching, research and outreach mission of the University.

There are a lot of problems in higher education (I’d be happy to enumerate all of them) and higher education computing, but the ability to make an impact with technology, both quickly, and more importantly, layered over months and years and decades, is really unmatched. The rapid pace of technology and academic (undergraduate) turnover is balanced by a long lived and deliberate culture.  Affecting change can be long, slow, and hard, but time also allows for pretty amazing systems to emerge bit-by-bit and brick-by-brick.

Most of all, despite itself perhaps (it might not again today), it gave us open source, and open source completely changed the world of computing.

I want to be a part of that. That still exists in pockets in higher education computing at every institution, a provision of time and the space and the problems that interest me most. The University is still the best place — or at least my best place —  to have the chance to do and to learn.

My realization at OSCON was that at next conference I had the opportunity to go to, I wanted my badge  to read University of ____ or _____ University_ below my name, and not a technology company or a retailer or a medical institution, or any of a thousand other great places.

On August 1, 2018 I had an interview for the first time in four years.

I’ve been doing some form of what I do now professionally for 26 years, I’ve dealt with tens of thousands of computing problems and situations, I’ve given presentations, great, meh, and downright bombed awful. I’ve been on the stage with the Governor.

And I still get nervous as hell talking about it.

This was a University job. And from every bit of University web searching, and technology searching, and blog posts and twitters, it was a job that I felt like I could be a good fit for, and that I would enjoy.  It was a pay cut and a commute. But it was interesting and meaningful work, and a peaceful commute (maybe even actual public transportation!), and if you are going to be on site for any job, as walkable and pretty an environment as you can find.

It’s also the type of technology work that I will never ever be able to explain to my parents, which is usually the best technology level I enjoy the most (sorry y’all! I’ll fix those browser popups soon!)

But I was me, fully me.  Rambly, knowledgeable, and completely honest about what I did and didn’t know, fully hopeful and realistic both at what University computing is about.

And more, the people I had the opportunity to meet seemed to be completely okay with me being me. And that was pretty awesome.

I asked a few questions to understand the team dynamics as best you can in that setting. That team, and the culture that’s been built there seems pretty fantastic. The team values their work, and they most certainly value each other, and they are most definitely making an impact.

I don’t know if it’s one of those “don’t look too eager” faux paus to say, and I said as much. But you know, to hell with conventional wisdom. When you know something is right, you say it.  We got to the end of the time:

“I really want to work with all of you, and I hope I have that opportunity”

On August 23rd (Universities take forever to process hires, and this time not one, but two were involved). I found out officially that I’d get that opportunity. I accepted on the spot.

I’m going to be working on who knows what all, but to start, it’s going to be a lot of OpenShift. I’m joining the UNC Middleware team within their central IT group as a Senior Solutions Engineer — which is by far my favorite official title that I’ve ever had.

Beginning September 24th, my badge at any future conference that I have the chance to attend, or speak at, or support, for as long as they might have me is going to read:

And I couldn’t be more excited.