Doing something changes how we see it

My title comes from a quote in a keynote at OSCON 2011 from Ariel Waldman.  Along with Eri Gentry’s keynote — both stood out for me as the most interesting, and most inspiring of the morning keynotes.  I think because both embody something that Tim O’Reilly spent a fair amount of time talking about a few years back:  they are both working on things that matter.

Open hardware, open software, open source, open cloud, all of that is really cool — and it’s changed the world in a lot of ways. Ariel and Eri (and others at the conference) were talking about _open science. _As someone that’s spent a career in computing — and that has loved all things science all of my life, all of that is incredibly interesting to me.  Maybe the computing even more so, I certainly can speak to those more as a practitioner.

But I think, even more than open hardware and software, open science matters.

OSCON is an inspiring time,  I’ve had a chance to work with and around a lot of smart people within the University, but I’m flat out awed, and even a little starstruck at OSCON. It is what I hope that the University would be, and sometimes is on its best of days, a group of brilliant, passionate people that speak their minds, and listen to the same and they do things — and most want to do things that matter, and then-  like Steve Yegge — exhort others to do the same

I have a lot of frustration with higher education.  I think above all, it all boils down to that we have a lot of people that just do nothing.  I don’t mean that they don’t do work. Contrary to misinformed belief, the majority of University staff work really hard at what they do. What I mean by nothing, is that a lot of time is spent rearranging deck chairs — or the more apt metaphor — moving piles of paper from one side of the desk to the other.

There’s a lot more time spent talking than doing.  And I don’t mean talking in the age of enlightenment sense.  It’s not a iterative exchange of ideas, it’s not a challenge to the status quo, it’s a reinforcement of it. And I think the reason why boils down to Ariel’s quote. Doing something changes how we see it.  And change is hard. Even, or maybe especially, in the academy. 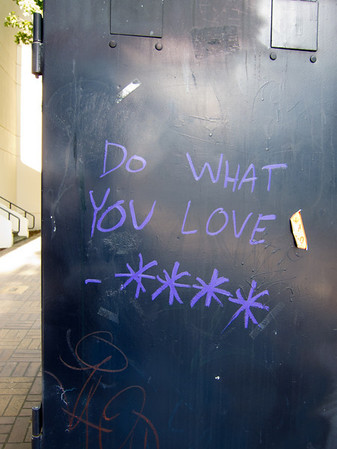 By no means do I think this is limited to higher education, perhaps it’s just a little more egregious because that’s where I am.

I like to think that it’s because education is to be held to a higher standard, that _learning is doing. _And if you aren’t doing, and you aren’t learning, you don’t belong here. We’ll say that of students, or we used to, but that’s not who I’m talking about.  I’m talking about us, the administrators, the educators, and those supporting the administrators and educators.  There’s too many of us not learning, and not doing.  And we aren’t changing because we aren’t giving ourselves a chance to see things differently.

In 1997, I interviewed at a couple of places when I left my first job.  I interviewed with a local division of a software company writing games for kids, and had a chance to do IT for them.  They were a great, passionate group of people, but I had my heart set on the university. I wanted to learn as much as I could from the people I thought were the smartest I had ever seen in computing. I believed then, and I sometimes believe that now on the best of days, that the university was the best place you could be to do that.

I remember a few months later, I got a call from the owner of the software company checking back with me to see if I changed my mind. I remember to this day the passion in his voice when he said “we do stuff that matters.”

That man believed in what he did.  He did what he loved. And he wanted others to be part of that.

There are a lot of days that I think I don’t belong here. I don’t love pushing piles of paper from one side of the desk to the other. And I flat out dislike rearranging the deck chairs.  And too many of the problems I’ve worked on have been just that.  And while the problems can be interesting, and I love to solve problems, I want to do stuff that matters.

But one thing that came out of OSCON last week as well, I got to spend a lot of quality time with my colleagues.  We’ve gotten pretty good at solving problems the last few years, and we’ve earned that very rare chance to spend a little bit of time, and experiment some. To try a few ideas. To learn. To do. It’ll be open source.  We hope that it’s going to be open science. Helping others make sense out of the science information that’s out there, bringing people together to learn and to do.  We’re just starting, but we think it might matter.

And for a time, perhaps, that changes how I see it.