I think I’m more concerned we’ll see the intellectual equivalents of the App Store reviewers use increased controls in the operating system to do whatever control freaks do. But I remember then that they already do in most IT environments.

I’m Mark’s age. But my background is, and certainly my abilities are, different.

In third grade I went to Fuller Magnet School in Raleigh — seeing my first computer ever — and having a chance that few lower-middle class kids from the rural suburbs had then — and few chances that they have today. I had electives, I was able to take a computer class. I learned LOGO on Apple II’s — and then BASIC.

“Learn” is a misnomer. I used it. I don’t know if I was taught loops or not, I don’t think so, but I don’t remember, but even if I was, I’m not sure in third grade I could have understood them. So I wrote hundreds of repetitive “Plot” statements — I stayed late after school waiting for my mom to come pick me up — the buses didn’t run from Raleigh to rural Garner where I commuted to the school — to print out “NC State #1” on the screen. Most of my classmates gave up long before I did in that pre-Ritalin era. But there I was, plugging away, line after line after line.

My first computer I had at home was a Timex Sinclair 1500 I think it had BASIC too, but I don’t think I understood that. Instead I spent hours loading Frogger from cassette tape, waiting for 5+ minutes for it to load, and then eventually crash, at which I’d load it again, lather, rinse, repeat. My friends usually gave up on it, and went down the street to play on the Commodore 64 — that had cartridges and better graphics. 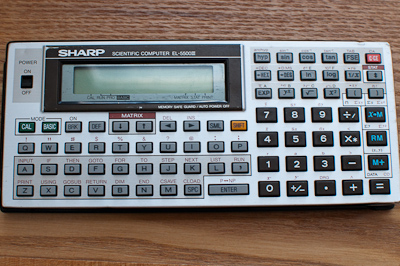 I ended up getting a “Sharp Scientific Calculator” — a luxury that very few kids had in the rural schools I went back to when the commute to downtown wasn’t working out so well. In my pre-algebra and pre-geometry years I didn’t have a clue what any of the functions on it meant. But I learned I could type line after line after line of Print statements in the tiny one-line screen — which I did, using the attached 2.5 in thermal printer to plot out ascii graphics. And when I got the spaces off, I’d go back and retype all the lines again, lather, rinse, repeat.

My schools didn’t have any computers, not for the kids at least. I didn’t touch computers again until, as an alternate to the Math program at the NC Governor’s School in 1990 — I got to try out “Assembly Language” and “Pascal” I remember vaguely that I had classmates like Mark, kids that I was awed of that parlayed hard work, opportunity, and brilliance into becoming programming contest winners light years beyond me. And it’s safe to say that I had opportunities to that point — and that tenacity — that put me light years ahead of the kids back home.

The rest, well, with my first “real computer” — is history — 19 years of computing support, system administration, and even software programming — 19 years of using multiple computer platforms and a handful of languages, shooting myself in the foot with every last one of them, and fixing the mess. 19 years of helping others to do the same. Lather, rinse, repeat.

I worry about Apple. I can understand Richard Stallman’s dystopic vision. I fear that too.

Here’s the hope. That OS, that hardware, is paradoxically more accessible to far more people than most things that have come before it. The tinkerers will tinker, but the general population — even the academic population — does not. They won’t even lather, rinse, repeat. 19 years of supporting them has shown me that.

And neither do most. But they use the iPhone and the iPod Touch. They use it like they’ve never used any computer before it. It’s their window into the freedom0-powered web that enables them to connect to each other in ways — similar to the ways they always have in their local communities — but in wider ways in the larger world. It’s letting those that never could connect well within the local community — kids like me that were spending hundreds of hours on thousand of plot lines — to connect too.

I don’t want to settle for mediocrity. I don’t want to give up freedoms to gain them. But these devices — and more — that web — are bringing down command-and-control IT overlords in the process.

The iPad is going to do that. And more. It’s going to change computing. It’s going to screw some and vastly enable others. Just like every platform has before it. Lather, rinse, repeat.

I don’t welcome my Apple overlords. But I welcome the change, at least for now.