More bars, at least in the house

My wife and I had been cell-phone only for quite some time both before we were married and after. Then we moved to a more rural part of the triangle, and switched to AT&T wireless and found ourselves in quite the cell-hole. Especially in summer when the leaves on the trees came in.

After weighing the options at the time (Vonage, Time Warner Digital Phone, or Embarq Plain-Old-Telephone Service) — we ended up going with Embarq for a variety of reasons, just hoping for the day that AT&T might have another tower or two out here. It’s not that we disliked Embarq (though I could list several annoyances I had with them) — it’s just that it wasn’t worth $60 a month to have local+long distance service for a phone we didn’t use all that much, but needed it when we needed it. 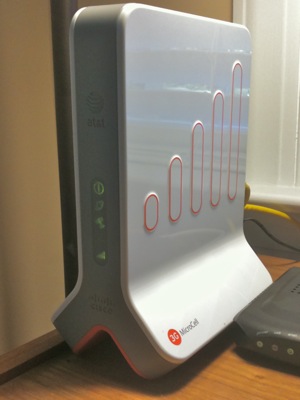 That day never came. But the day has finally come that you can put a tower inside the house.

Raleigh is thankfully one of the first test markets for the roll out of the AT&T MicroCell device — which I didn’t know until yesterday, I thought it was only in Charlotte. But after checking AT&T’s site again, my zipcode was an availability hit, and within 15 minutes I was out the door to my local AT&T store to buy the device.

The AT&T MicroCell is a AT&T and Cisco branded device that piggybacks on your home broadband and advertises a 3G signal to authorized devices. You buy the device $162 (incl. NC’s 7.75% sales tax) and you either use your existing plan minutes against it, or pay $20/month for unlimited minutes with the device (unless you have AT&T broadband, where the “unlimited minutes” using the device are cheaper per month). If you do sign up for monthly charges, there are subsidies for buying the device. 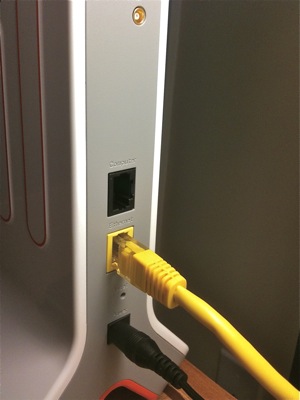 It honestly (perhaps surprisingly?) was incredibly simple to setup. You plug it into an open ethernet port on your existing home router using (or stick it between your Cable/DSL modem and your computer if you don’t use a router or between your modem and access point if you just use a single port Wireless Access Point/Router) wait up to an hour and half to update and initialize itself (that seems like an incredibly long initialization time to me, but hey, I’m impatient with new technology) — and you’ll eventually get an SMS message that it’s ready to go: 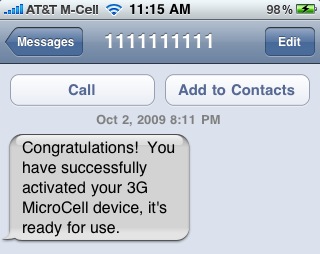 Note the network signature, and the (5!) bars:

So, $162 later, and I can now use my cell phones again in the house — and also importantly have reliable SMS for notifications (and I’m guessing more reliable visual voicemail on the iPhone) Call quality seems perfectly acceptable. There’s E911 location and from the address on file with AT&T (and there’s GPS on it, which I guess transmits to more modern E911 systems, I’m not up on their technology). It piggybacks on my super-reliable Time Warner broadband — which Vonage would do, as well as Time Warner’s Phone Service (well, Time Warner might reserve some bandwidth for the phone service, I’m not sure). But there’s no additional monthly charges on top of what I’m already paying AT&T for cell service — where we have lots and lots of minutes to spare. (And my $30/year outbound Skype service is what I use for conference calls already)

The drawbacks? No service when the power goes and the UPS runs out. And getting rid of the phone line means I can’t send the occasional fax anymore if I need to (without signing up for one of the email-to-fax gateways). But that’s perfectly okay — my feelings on fax machines are best reserved for Office space scenes

AT&T’s MicroCell — very highly recommended (so far). I haven’t been this excited about giving a telecomm money in, well, forever.