It is all over once you name the thing 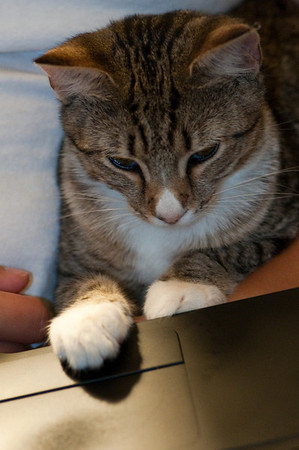 So, my wife and I had a follower this weekend. On sunday, we took our dogs for a walk together, the first in quite some time, and as we got halfway through a long wetlands/natural area in our community — we spied, well, our dogs spied a cat. Our dogs think cats must be part of the squirrel family and then proceed to usually have a conniption fit. We’re used to seeing cats in the neighborhood, there’s a few feral populations around and about, and they normally run, and we normally are very happy to let them do so. But this cat was different than all the others.

My wife is an animal loving saint, thankfully within reason. While we’ve saved at least one family of feral kittens, and surrendered a badly injured feral adult to an emergency after hours clinic — thankfully for the budget and sanity, we’ve only adopted two shelter creatures (and their much, much, larger sister)

We’re not cat people. Not that I’m really sure what a cat people is, but we aren’t them. We are both mildly allergic to them, and again, our dogs think cats and squirrels seem to be best howled and whined at.

But, we were followed. And independently we both came to the conclusion that were the cat to be named, along with Winston and Truman, she probably should be named Eleanor. That’s if she were to be named.

It should be noted I thought of the name after I bought the cat condo, and before the cat insisted every time I or my wife walks into the room on crawling into our lap and nuzzling our chin. I think my wife had me beat by several hours though.

I’m not sure that Elinor (my wife’s insistent spelling) will stay with us. But she handled a bath without too much drama, got a mainly clean bill of health and is probably six months old. The vet is a little worried about Feline Infectious Peritonitis — but it could be the intestinal parasites too. A week or so will tell for sure. She’s got an appointment to be spayed. She’s been microchip scanned, and neighborhood email posted, but our guess is she got dumped — probably not very long before we walked by.

The pups, well, we’ll see how they do in time too.

I’m not sure what the future brings for Eli or for us, but for now, she has a home, and maybe for this time, we’ll follow her too.