The day started normally, though a bit late. Truman and I went for a walk, and I ended up calling in to the staff conference.

Meanwhile, my wife is browsing the pets section at Craigslist. Apparently there are multiple pups at the Harnett County shelter that are not going to make it beyond the next morning. Some folks from NCSU are posting all over Craigslist the pictures of the dogs (and cats) offering to bring them to Raleigh.

She has a feeling — like the feeling she had with Truman. About a lab mix with a sad face with a tiny little picture.

I’m not so sure. I like our life. Married almost 15 months. Our first house together. Our first pup. He’s great. He was a complete impulse rescue from the Johnston County shelter. But he’s doing great. We’re doing great.

And the holidays are coming up. Stress for her and me both at work, stress about the holidays.

I’m Mr. Conservative. Can we take on another dog now? Sure, we talked about getting Truman a friend. But later right? I’m running the budgets. Thinking about travel. Worrying about schedules. She knows that weren’t going to do this yet too. She understands my hesitance. She’s worried too.

Yeah, we have the budget. We’ve got the room, the fence is in. I stare at Truman, completely zoned out in the chair. I’m just not sure. I want to be the realist. I want to say yes. But I want to say no, too. The line between logic and emotion is hard to hold when there’s a shelter pup and a life on the the line.

She’s sending the link to friends, posting in forum posts — hoping to find him a home before, well, there’s not a chance anymore.

Heart strings are tugged, but for most, there’s no room at the inn. For others, well, it’s just not the time.

She calls, he’s still there. I finally say “let’s do it” We drive to Lillington and meet the most timid dog imaginable. We avoid looking at all the other dogs. There’s a few questions. He’s not Truman. But there’s still a feeling.

A vet visit, shots, dewormers, an appointment for a neuter, and a very much needed bath later — the pup is beginning to perk up. He gets a name — Winston.

He looks a lot better after a bath and some play time. 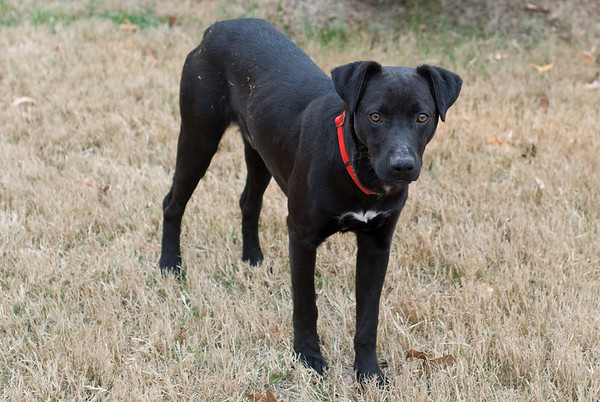 The next day — there’s no dogs listed for adoption any longer at the Harnett shelter. And Truman and Winston seem to be doing just fine together. 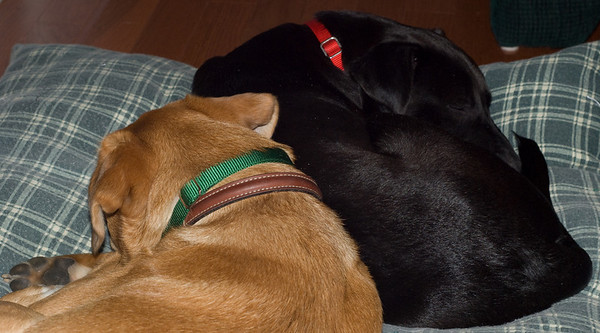 I twittered his name last night, and a fellow dog-loving friend from Iowa said “Winston and Truman, eh? They should be able to change the world!”

Yes, I think so. They’ve already changed ours.